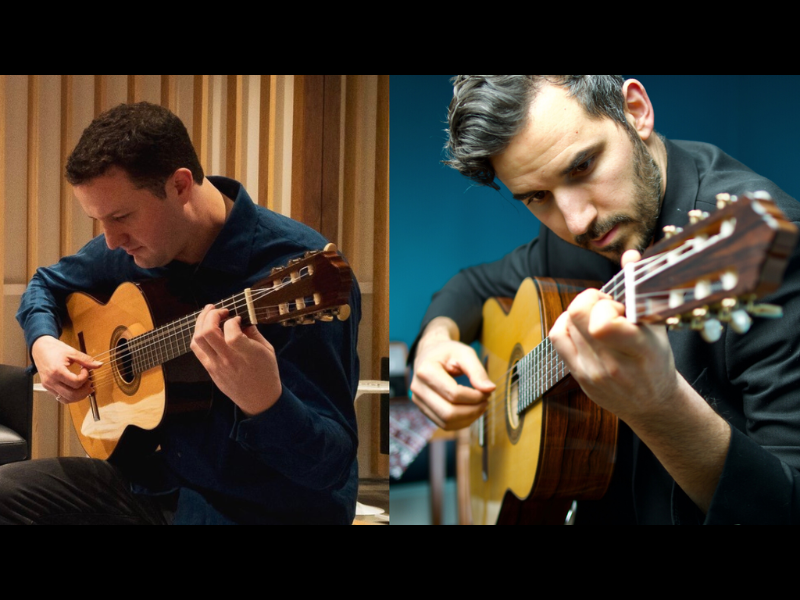 Siempre La Guitarra is a classical music concert series presented by David Tutmark and Oregon Guitar Studio. David was inspired by his love of the guitar and classical music to create the Siempre La Guitarra concert series with a mission to bring great guitar players from all over the world to the Pacific Northwest.
Join us as we host the first concert in the 2023 series featuring talented and accomplished classical guitarists, Mario Diaz and David Tutmark!
Mario Díaz is a multi-instrumentalist (plucked strings/voice) whose musical activities have taken him across the U.S. and South America. He serves on the faculties of Portland State University, Willamette University and Reed College. In addition he is Director of the PSU Guitar Series for which he received the PSU Foundation Philanthropic Cultivation Award in 2020. He directs the guitar program at Oregon’s longest standing summer music program, Young Musicians & Artists. Mario also maintains a private teaching studio in Portland and serves as a clinician and adjudicator across the region.
Díaz’s work as a soloist and collaborator crosses over into a wide range of styles and traditions from classical to jazz. He has toured, recorded and/or performed as a sideman with Antonio Rey, Dave Eggar, Martin Zarzar, Portland Opera, Third Angle New Music, 45th Parallel, Fear No Music, the Oregon Guitar Quartet, Oregon Catholic Press, among others.
Mario holds a Bachelor’s degree in music and a professional studies certificate in recording arts and music production from Portland State University, and a master’s degree in classical guitar performance from San Francisco Conservatory of Music, where he studied with composer/guitarist Sergio Assad.
David Tutmark maintains a busy schedule in the Pacific Northwest as well as performing abroad. After earning a Bachelor’s degree in classical guitar performance from PSU, David began a successful performance career, giving over 350 concerts between 2012–2019. David has toured extensively as a soloist as well as a member of an international guitar duo, performing in Chile, Mexico, Italy, and across the United States. In 2018 he did an extensive solo tour of Chile as part of the Entrecuerdas guitar festival. In 2019, Mr. Tutmark was invited to perform at the prestigious international guitar festival “Cuerdas Al Aire” in Lima, Peru.
In 2022 David was invited to perform in the Dominican Republic as a featured artist in the Guitarrando guitar festival in Santo Domingo. David is also on faculty at Clackamas Community College in Oregon City Oregon where he is the professor of classical guitar. Throughout 2019, Mr. Tutmark worked closely with a Portland Oregon based composer to create a new concerto for guitar and orchestra, which David premiered in 2022. Whether for audiences large or small David is known for his visceral yet polished style of playing, and consistently delivers captivating performances of traditional and contemporary classical guitar.